Our household currently consists of myself, my longtime companion, Gene, and our youngest daughter. The 2 older girls are out on their own now but still come home to play with the pups - often bringing the grandchildren with them. 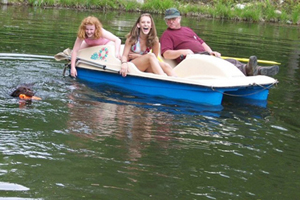 In the early 1990's, Gene acquired the dog he had always wanted - a chocolate Labrador Retriever. Cinnamon came to live with us as a pup and was all our oldest daughter could ask for as a playmate. She slept in bed with her, sometimes even pushing her out of bed. As we came to know the breed, we discovered the “Field” lines vs. the “English” lines and found Cinnamon to be a mixture of both. As time went by we also learned the health issues that plague this wonderful breed. Cinnamon was bred a couple of times, producing some good hunting dogs and some great pets.

In 2002, we met Crescent Pierce of Randallane Labradors and Morgan Horses. She agreed to sell me what would become my foundation bitch and the beginning of a serious breeding program. This meant that I had to learn how to read pedigrees, look at dogs and be able to see movement and how a dog is put together vs. how they should be put together. Crescent taught me so much about structure and how to breed correctly.  She sold us Morgan and coached us along the way as Morgan grew and was finally old enough to pass her final hip and elbow clearances and be bred to the correct male. We moved forward with Morgan, keeping some and then purchasing some to add appealing pedigrees and bloodlines.   It was a friendship that lasted long past the time of Crescent’s death as I can still hear her telling me things.  We grew slowly -- this is not something to jump right in to. We constantly learn as we breed and now do more genetic testing beyond the scope of hips, elbows and eye exams.

While our dogs spend time in the kennel, you can always find some in the house sleeping on the couch or in someone’s lap.  Our dogs are all well socialized with us, company that comes to visit and with all the other dogs that live here.  When the kids were young they went to the kids' ball games with us and they still go with us on day trips in the car. We love taking a dog along for a ride and often rotate who gets a turn in the car - they all love to go for rides.

The dogs in the kennel have their own runs, but also take turns in the ½ acre fenced in play yard. We have our own pond with a dock and teach all our dogs to do land and water retrieves. All pups that are here in the summer months are introduced to the pond and are taken swimming several times before they leave for their new homes.

We love and value this wonderful breed.  We want this breed to continue with the looks, drive, breed type, health and compassion that is already in the breed.

Prior to becoming breeding dogs, all of our dogs are tested for the proper health clearances.  Copies of these clearances for the sire and dam are included in each puppy's "going home" package.

Bred By Us/Owned By Others